Her Master's Walks in the Cleveland Hills 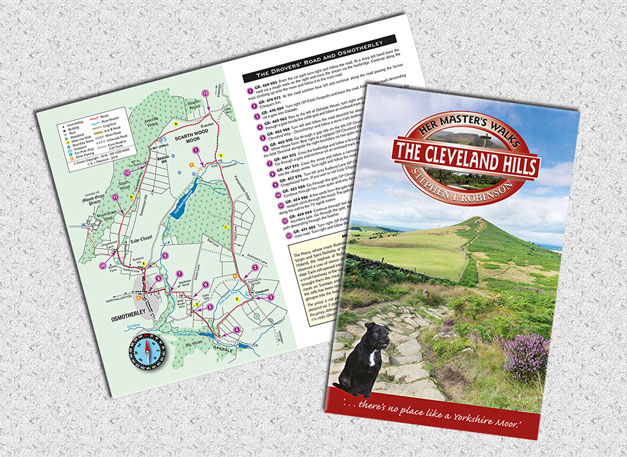 The Cleveland Hills mark the north-western border of the North York Moors National Park. They incorporate some of the highest hills in the North York Moors, rising to 1490 feet (454m) at Round Hill on Urra Moor, the highest point in the National Park. The Cleveland Hills also embrace the distinctive cone-shaped peak of Roseberry Topping, Yorkshire's most famous hill, which may be small in stature, but it has been dubbed the 'Yorkshire Matterhorn'. Alan Hinkes, the first British mountaineer to climb all fourteen of the world's highest peaks, says it's his favourite hill - and he knows a thing or two about impressive peaks!

With over 1400 miles (2253km) of public rights of way, the North York Moors National Park provides considerable potential for the walker. There are several long-distance routes, the most famous of these is probably the Lyke Wake Walk, a 40 mile (64km) challenge walk from Osmotherley to Ravenscar which has to be completed within twenty-four hours. In contrast to this is the Cleveland Way, which traces the border of the National Park from Helmsley to Filey Brig, a distance of 110 miles (177km). This can be enjoyed at a more leisurely pace lasting from seven to ten days, or longer!

In addition to its natural riches, the area also boasts a wealth of archaeological, historical and industrial interest. It contains the largest Iron Age hill fort in northern England, stone circles, earthworks, Roman fortifications, abbeys and castles. After walking in this beautiful landscape, you will experience an unrivalled sense of freedom and a yearning to return.

Each walk has a two-page description, a colour map with numbered arrow pointers and route directions with grid references to aid map reading. All of the walks follow circular routes ranging from 5.5 to 9 miles (8.8 to 14.5km).

Sample pages of walks featured in the books can be viewed and printed out from The Walks page.